How does the atmosphere influence low-flying satellites?

The motion of a satellite depends on gravitational and non-gravitational accelerations. A major problem in the precise orbit determination (POD) of low earth orbiting (LEO) satellites is modelling the non-gravitational perturbations. Among them, the atmospheric drag acceleration – mainly depending on the thermospheric density – is largest for LEOs with altitudes lower than 1000 km. In case of the Swarm A and C satellites with an altitude of around 460 km, the non-consideration of the drag deceleration would cause an integration error in along-track of around 3 m per revolution. Consequently, the knowledge of the thermospheric density is of crucial importance for a LEO-POD. 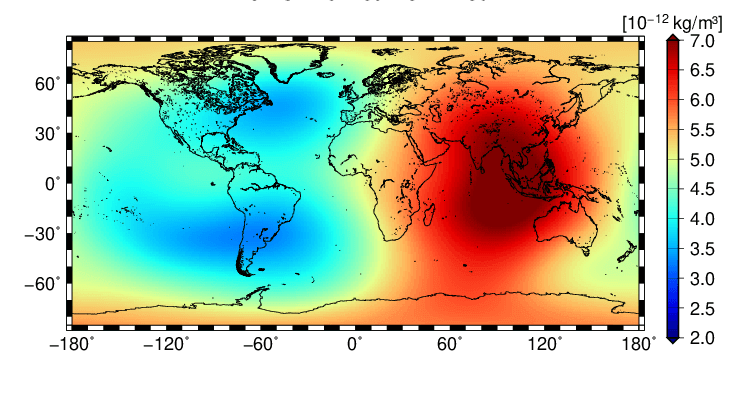 © Michael Schmidt - generated with GMT
Global distribution of the Thermospheric Density at March 18, 2015, the day after the St. Patrick’s day, at 10:00 UT

In many geoscientific applications, e.g., remote sensing, satellite altimetry and satellite gravity missions, the orbits of LEO satellites should be known with a sub-centimeter accuracy. As an example, the Figure above shows the global distribution of the thermospheric density at March 18, 2015, the day after the St. Patrick’s day, at 10:00 UT. The impact of a geomagnetic storm on the thermosphere is usually several hours later than for the ionosphere. This delay is caused by the coupling processes. In this figure the thermospheric density is computed from the empirical model NRLMSISE-00.

Thermosphere models can be subdivided into physical and (semi-) empirical models. Data assimilation approaches are then used to combine available models with observations and ensure their consistency with reality. In POD, the thermospheric drag is usually described by empirical models such as:

These models are amongst other quantities, driven by globally defined space weather indices such as the F10.7 (reflecting solar radio flux) and the Kp (reflecting magnetic activity) indices and other parameters such as local time and position. Currently no thermosphere products such as Global Thermosphere Maps can be provided via GGOS. Several projects and other initiatives such as the Focus Area – Geodetic Space Weather Research are dealing with the development of thermosphere models. One promising approach is the setup of time- and space-dependent scale factors – estimable, for instance from SLR or accelerometer measurements – which can be provided for several empirical thermosphere models such as the Jacchia-Bowman 2008 or the NRLMSISE-00 model.