How can geodesy contribute to weather prediction?

The troposphere and the stratosphere are referred to as the lower neutral atmosphere. It extends from the ground to altitudes at around 50 km, above which charged particles dominate. In general, the refractivity of the neutral atmosphere depends on the density and other characteristics of atmospheric constituents and on the wavelength of the electromagnetic signals. The latter can be neglected for microwaves. The refractive effects on radio signals are typically separated into hydrostatic and non-hydrostatic parts. 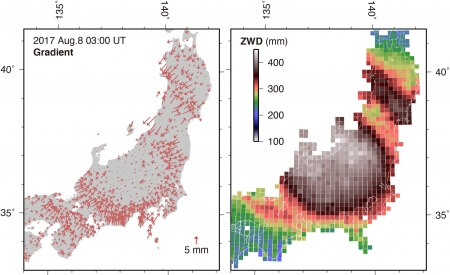 The hydrostatic part can be relatively precisely modelled and corrected on the observation level knowing the atmospheric pressure and temperature at the observer’s position. Zenith hydrostatic delays (ZHD) are mapped into the slant direction of the observed signal through mapping functions. In contrast to the hydrostatic part, the non-hydrostatic atmospheric constituents, mostly water vapor, cannot be simply modelled and corrected. To account for the non-hydrostatic part, the zenith wet delays (ZWD) and the horizontal gradients are inserted into the observation equation system as unknown parameters and are estimated together with other parameters, such as Earth Orientation Parameters and station coordinates. At optical wavelengths (e.g., SLR), the non-hydrostatic contribution is about 70 times smaller and thus typically negligible, whereas the hydrostatic part is about 6% larger than at radio wavelengths (e.g., GNSS, VLBI, DORIS). As an extreme example for atmospheric effects on radio wave propagation, the figure above shows the impact of the typhoon Noru on the distribution of atmospheric delay gradients and zenith wet delays in central Japan. The method for the calculation of the ZWD is described in Arief and Heki (2020).

Comparative studies have shown that ZWD, derived from space geodetic techniques, radiosondes and water vapor radiometers largely agree apart from some remaining technique-specific effects. The current research is on the establishment of atmospheric ties (IAG JWG 1.1.1 “Intra- and Inter-Technique Atmospheric Ties of Commission 1 joint with IAG Sub-commission 4.3 and GGOS”) in order to allow the combination of tropospheric parameters, derived from the individual space geodetic observations. These atmospheric ties could then serve as additional constraints to strengthen the integration of the different space techniques within the ITRF computation.

The ZWDs, slant delays and gradients provide important atmospheric information for weather models. Several international weather centers assimilate ZWD or slant delays. The potential operational usage of gradients is in focus of current research. ZWD has a linear proportionality to the vertically integrated water vapor, which is a key quantity for atmospheric sciences and climate modelling and prediction.

The website of the Global Geodetic Fluids Center (GGFC) provides a link to the mapping function service of Vienna University of Technology (Austria):