Why are height systems so important? 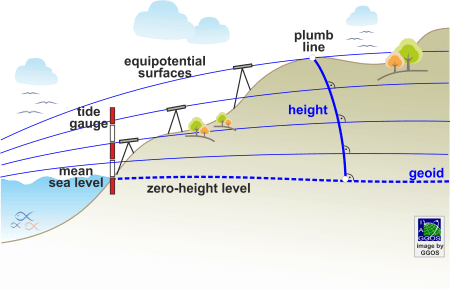 A height system is a one-dimensional coordinate system used to express the metric distance (height) of a point above a reference surface (i.e., the zero-height level). If the reference surface and the height are linked to equipotential surfaces and the plumb line of the Earth’s gravity field, the height system is called physical height system. If the reference surface and the height do not depend on the Earth’s gravity field, the height system is called geometric height system. In the latter, the reference surface is a reference ellipsoid and the vertical coordinate is the ellipsoidal height, which is usually derived from satellite positioning techniques (i.e., GNSS: Global and Navigation Satellite Systems). The reference surface of most of the existing physical height systems is linked to the mean sea level determined at a tide gauge. As the mean sea level varies geographically and with time, mean sea level values used for the definition of the zero-height level in different countries may present discrepancies up to some decimetres. The traditional way to obtain physical heights is geodetic levelling in combination with gravity reductions along the so-called vertical or levelling networks. The gravity reductions are necessary to take into account the non-constant separation between equipotential surfaces due to variations of the Earth’s gravity field. Depending on the gravity correction applied to levelling, different types of physical heights are distinguished: orthometric heights, normal heights, or dynamic heights. Thus, the height of a point can be determined in many slightly different ways, each of which gives a different height coordinate for the same point.

, where h is the ellipsoidal height,

are the orthometric and normal heights, respectively,

is the geoid undulation, and

is the height anomaly. The geoid (

) are to be determined by precise gravity field modelling approaches and may be combined with GNSS positioning to obtain physical heights, without the necessity of performing levelling surveys. 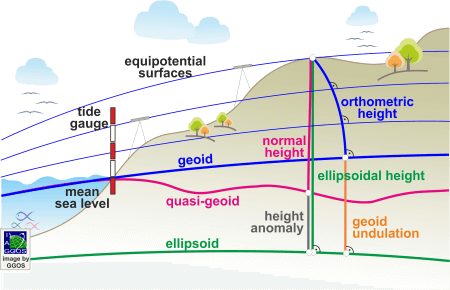 As most of the existing height systems refer to local mean sea level values (and consequently to local geoids) and are realised by national or regional levelling networks covering specific regions, they are utilisable over limited geographical areas only. Thus, they are local height systems. At present, there are about 100 local height systems in use. Current efforts concentrate on the realisation of a global unified height system based on a common reference level for all the regions over the world and a unique, coherent vertical coordinate (see GGOS Focus Area – Unified Height System). This system is called the International Height Reference System (IHRS) and its realisation is given by the International Height Reference Frame (IHRF).