and their Time Variations

Why do we need precise positioning and navigation on Earth and in space?

The precise knowledge of the time varying positions of stations at the Earth’s surface is essential for quantifying changes in the Earth system as a basis for an improved understanding of the underlying geodynamic processes. These products are fundamental for many activities, ranging from disaster prevention and mitigation, the understanding of climate change to the building and management of a prosperous and sustainable global society. The International Terrestrial Reference Frame (ITRF) provides the global frame for estimating station positions and their time variations. As primary products, the ITRF comprises precise 3-dimensional station positions (referred to a reference epoch) and constant velocities of the ITRF network stations observed by space geodetic techniques, such as Very Long Baseline Interferometry (VLBI), Satellite Laser Ranging (SLR), Global Navigation Satellite Systems (GNSS) and Doppler Orbitography and Radiopositioning Integrated by Satellite (DORIS) (Links). The ITRF computation makes use of the entire observation time series for each of the four observation techniques covering almost 40 years for VLBI and SLR, and more than 25 years for GNSS and DORIS. 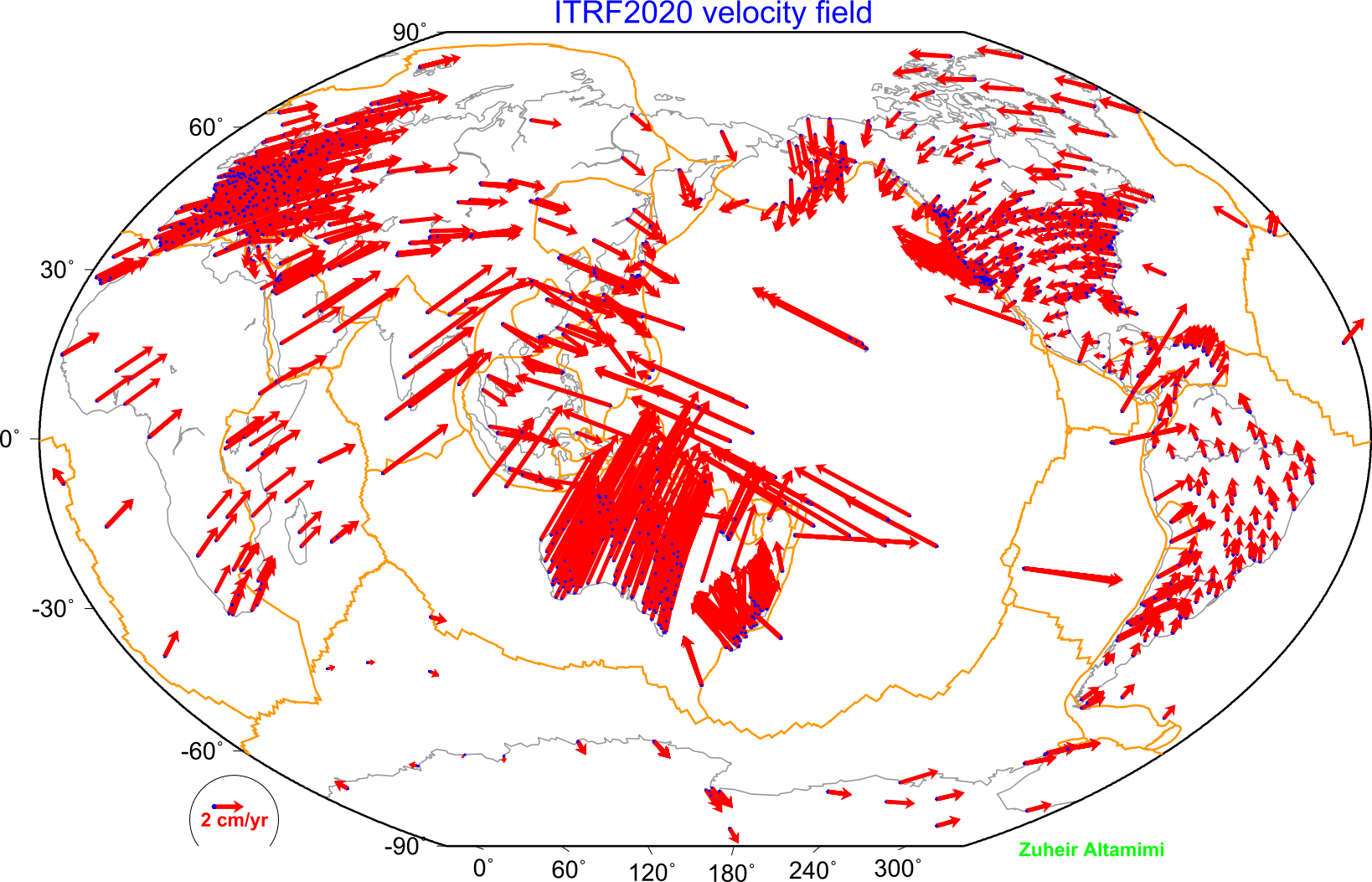 The time series analysis of daily or weekly estimated station positions of the different space techniques reveals nonlinear motions of several millimeters or even more (up to a few centimeters) for some stations. These motions are induced by various geophysical phenomena (e.g., non-tidal loading deformations caused by the atmosphere, hydrology and ocean) or technique-specific effects that are not properly modelled or for which accurate models do not exist. The handling of these nonlinear motions is subject of ongoing research by the three ITRS Combination Centers at IGN (Paris, France), DGFI-TUM (Munich, Germany) and JPL (Pasadena, USA) and many other groups. The official ITRS realization, the ITRF2014, is generated with an enhanced modelling of nonlinear station motions, including seasonal (annual and semi-annual) signals of station positions and post-seismic deformation (PSD) for sites that were subject to major earthquakes (Altamimi et al., 2016). The time series of ITRF2014 station position residuals are available at the ITRF website at https://itrf.ign.fr/. In addition to the ITRF results, also the geometric IAG services (IGS, ILRS, IVS, IDS) provide positions and their time variations for their technique-specific network stations. The links to the respective IAG service websites are given below. 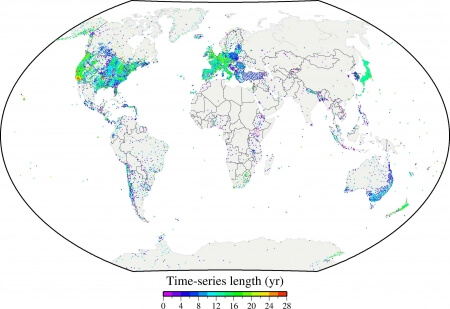 Every week, NGL updates the daily position coordinates of some 10,000 stations. 5-minute position coordinates are updated every day for 5,000 stations, and hourly updates are available for 2,000 stations. These products provide the basis for many applications and an abundant information for many kinds of Earth scientists. For example, the lower-latency products are useful for gaining early insight into large earthquakes by measuring coseismic and postseismic displacements as well as for the assessment of geohazards (see GGOS Focus Area Geohazards). 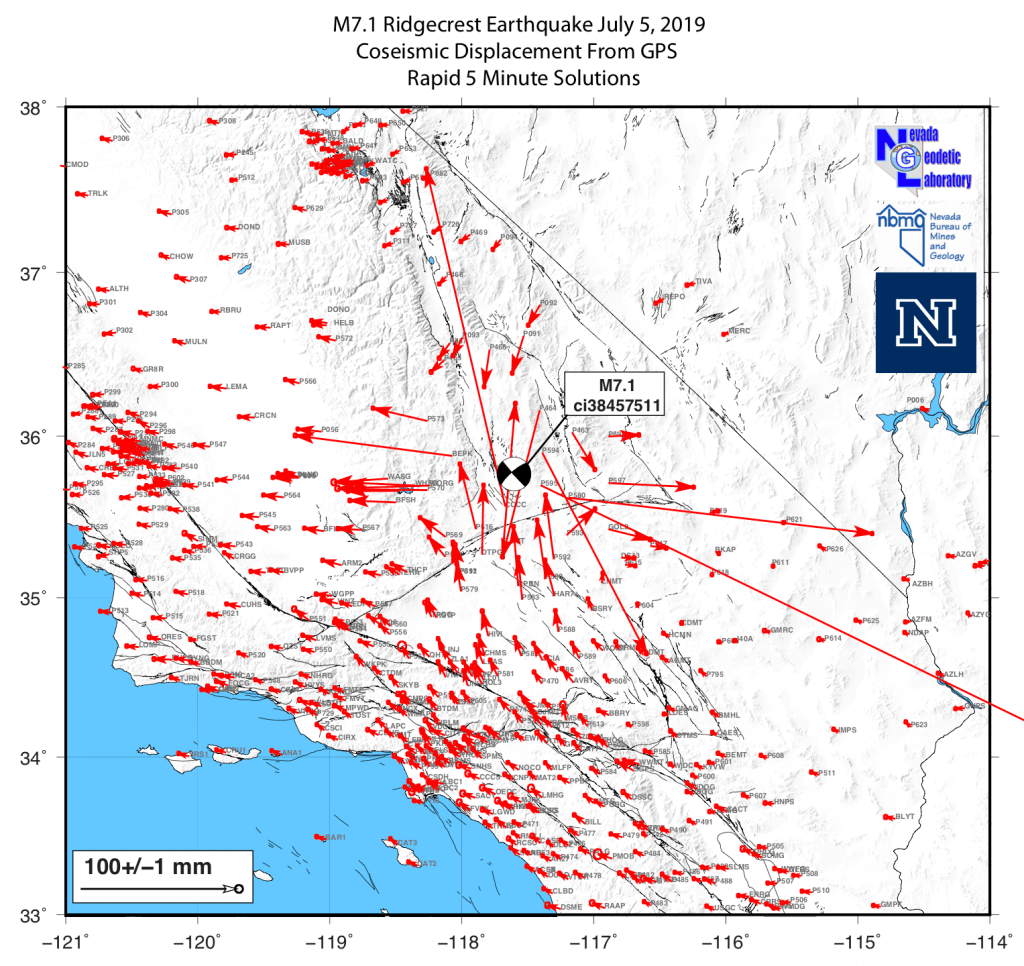 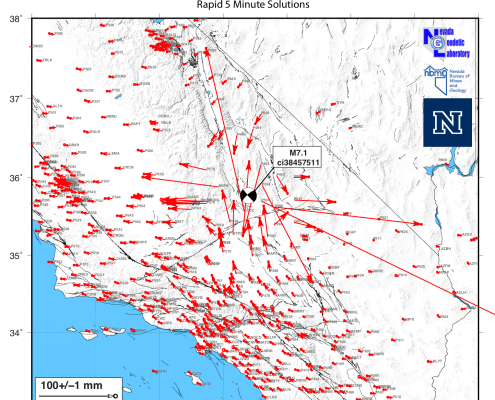 The principle of open availability of GPS data provided by contributing networks allows NGL to provide open, online access to the data products. As a result, network operators and data users can quickly access results without requiring advanced data processing expertise. NGL and UNAVCO jointly developed the Plug and Play GPS project, funded by NASA’s Advancing Collaborative Connections for Earth System Science (ACCESS) program. The goal of Plug and Play GPS is to encourage also less experienced investigators to participate in the geodetic community, for example, by installing new GPS stations in a region currently with sparse coverage. The idea is that any investigator can register a newly installed GPS station and deposit data at the UNAVCO archive, and in return NGL will process the data and provide the data products. This creates a win-win situation for everyone concerned.

Station positions and their temporal variations for regional networks