How does electron density affect positioning and navigation?

The Earth’s ionosphere as part of the upper atmosphere is the most important atmospheric layer for radio wave propagation in space between the satellites and the Earth. It has, for example, a large impact on the accuracy of positioning and navigation, but also on up-to-date GNSS applications such as autonomous driving and precision farming. Under usual circumstances, the ionosphere is the largest error source in point positioning with single frequency GNSS receivers. As an example, the Figure below shows a global map of the Vertical Total Electron Content (VTEC) on March 17, 2015, the St. Patrick’s day, at 13:00 UT. These large VTEC variations are mostly caused by a strong geomagnetic storm (Erdogan et al., 2020). 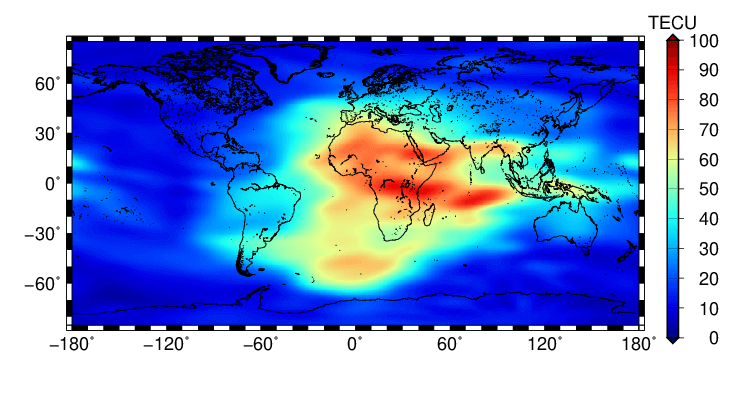 The ionospheric influence on radio waves is twofold: the signal travel times are changed and the signal paths are bent. The latter can be neglected for most applications. The ionospheric delay depends directly on the integral of the electron density along the signal path between the transmitter and the receiver, the so-called slant total electron content (STEC). In other words, if the STEC along the ray path is known from ionosphere models, the delay for a single-frequency GNSS measurement can be computed and to some extent corrected. High-precision ionosphere models are required, for instance, if precise navigation applications have to be performed with single-frequency receivers.

Since the STEC is defined as a quantity along the ray path between transmitter and receiver, i.e. usually between a satellite and a terrestrial receiver, it is not related to a uniquely defined fixed reference point. For that purpose a projection of STEC into the VTEC is performed by means of a mapping function depending on the zenith angle of the ray path. This conversion is realized by the idealized assumption that the vertical electron distribution can be neglected and all electrons are concentrated in a thin spherical layer at a constant height, i.e., a single layer ionosphere model. The intersection point of the signal ray path and the sphere of the single layer is the reference point of VTEC and called the ionospheric pierce point (IPP). Following this concept, ionosphere models describe typically the global variations of VTEC on regular grids with a spatial resolution of 5° x 2.5° with respect to longitude and latitude and a temporal resolution of 1 or 2 hours.

The International GNSS Service (IGS) and their Ionosphere Associated Analysis Centers (IAAC) routinely provide VTEC maps of the ionosphere to the users in IONEX format to correct their GNSS code and phase measurements for ionospheric influences. The following IAACs of the IGS routinely provide the Global Ionosphere Maps (GIM) products:

Since GIM are based on post-processed observations and so-called final orbits, they are typically provided to the user with latencies of days to weeks. However, high-precise modern GNSS applications such as autonomous driving and precision farming, require high-resolution and high-precision ionosphere products in near real-time (2 to 3 minutes) or real-time (less than 30 seconds).

Other products such as Regional Ionosphere Maps (RIM), global or regional near real-time (NRT) and real-time (RT) models are still under development or only partly available for scientific studies, but not routinely provided on a regular basis. The same statements are valid for electron density models for both the ionosphere and the plasmasphere. Today, these models still suffer from the lack of input observations.

Atmospheric disturbances caused by earthquakes and tsunamis can be detected by GNSS measurements. This can be used for tsunami verification and over the horizon tsunami tracking. The GNSS for Tsunami Early Warning System (GTEWS) is a part of the GGOS Focus Area Geohazards.

All products are GPS and GLONASS only solutions. They are post-processed, i.e. available with a latency of up to 2 or 3 weeks.