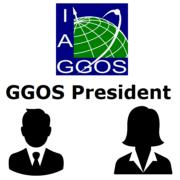 The GGOS President is the principal spokesperson and representative of GGOS to the IAG and outside organizations, and presides over meetings of GGOS: GGOS Days Conference (annually), the Coordinating Board Meeting (1-2 times a year, usually during EGU and AGU), and Executive Committee
Telecon (once a month).

Based on the nominations received, the Nomination Committee will prepare a list of candidates to be filled (normally two candidates) and will send it to the IAG Office. The result of the elections will be announced by June 2023.

For any questions or concerns, please feel free to contact either me, or any of the other members of the Nominating Committee listed at the top of this letter.

I am looking forward to receiving your nominations and I thank you in advance for your prompt attention to this matter.

Chair of the GGOS Nominating Committee