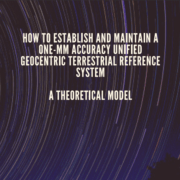 A new eBook with the title “How to establish and maintain a one-mm accuracy unified Geocentric Terrestrial Reference System – A theoretical model” was now published. 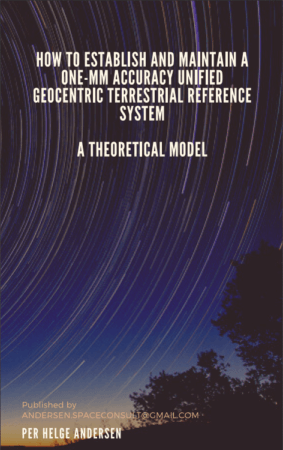 This book contains a set of mathematical models to go from individual raw observations with any space geodetic technique, to the establishment and maintenance of a Geocentric Terrestrial Reference System, GTRS, using decades of observations. The methods proposed here involves a simultaneous and consistent treatment of the GTRS, the Barycentric Celestial Reference System, the Earth orientation parameters, and gravity, 100 % consistent with the goals of the Global Geodetic Observing System, GGOS, and the IERS Conventions. To reach the goal of obtaining a GTRS with one-mm accuracy, the observations much be combined at the single observation level and several model parameters to be estimated must be treated as stochastic processes.

Detailed observation equations are presented and explained for the following techniques: VLBI, SLR, GNSS, DORIS, KBR, and satellite ACCelerometry, ACC. A detailed and consistent observation model covering all the present GNSS-systems is presented. An observation model for near-Earth VLBI observations is also included. Detailed methods for VLBI and GNSS phase ambiguity resolution is presented. Models for the use of colocated clocks and eccentricity vectors between techniques are described. In addition, all model parameters being candidates for inclusion in the solve-for parameter state vector, are identified in detail. Complete state-vectors at the arc-level and global-level are presented. State-of-the-art estimation methods are described in detail with the possibility to use both kinematic and dynamic stochastic parameters. There is a lot attention paid in the text to the modeling parts that will be essential to go from one cm to one mm.

The methods described in the book should be a very good starting point for the production of a new generation of ITRF/GTRS. The procedures leading to the present-day International Terrestrial Reference System, result in errors and inconsistencies between the techniques at a level of almost one order of magnitude higher than the internal precision of any of the techniques. The procedures described in the book, are expected to reduce these inconsistencies with an order of magnitude. “Unified” in the title of this book, means that the models of all types of high-precision space geodetic observations are expected to be consistent within the resulting GTRS to one millimeter. The simultaneous use of the different independent techniques can be considered as a strategy where the “problem” is observed from several “angles”. This strategy will certainly contribute to the de-correlation of the fundamental model parameters of relevance for the realization of the GTRS, BCRS, EOP and gravity.

This is only half of the story of space geodesy. The other equally important part is the availability of globally distributed observations of mm-precision from any of the techniques treated in this book. Only the analysis part is addressed in the text.

For more information how to buy this book, please click here…